Anuradhapura was the first capital city of Sri Lanka, and it was established in the 4th Century BC by King Pandukhabaya. For more than a millennium, it thrived as a religious and political centre before being ravaged by invaders, then abandoned and replaced as capital by Polonnaruwa.

The ruins of Anuradhapura is the extensive complex of the site which rich with archaeological and architectural wonders. This is the city which fills with ancient golden crumble temples, stony ruins and ancient pools, tanks, wildlife, art and architecture which are highly respected for their religious and cultural value. Which build during Anuradhapura thousand years ago.

The Best Places To Visit In Anuradhapura

Jaya Sri Maha Bodhiya is perhaps the oldest living tree in the world. Around 245 BC, Sanghamitta Theri brought with her a branch of the Bodhi Tree under which the Buddha attained enlightenment. The tree was planted on a high terrace about 21 feet (6.5 m) above the ground and surrounded by railings. Today, the tree is one of the most sacred relics in Sri Lanka, respected by Buddhists all over the world. A wall was built around the tree during the reign of King Kirthi Sri Rajasingha, to protect it from wild elephants. 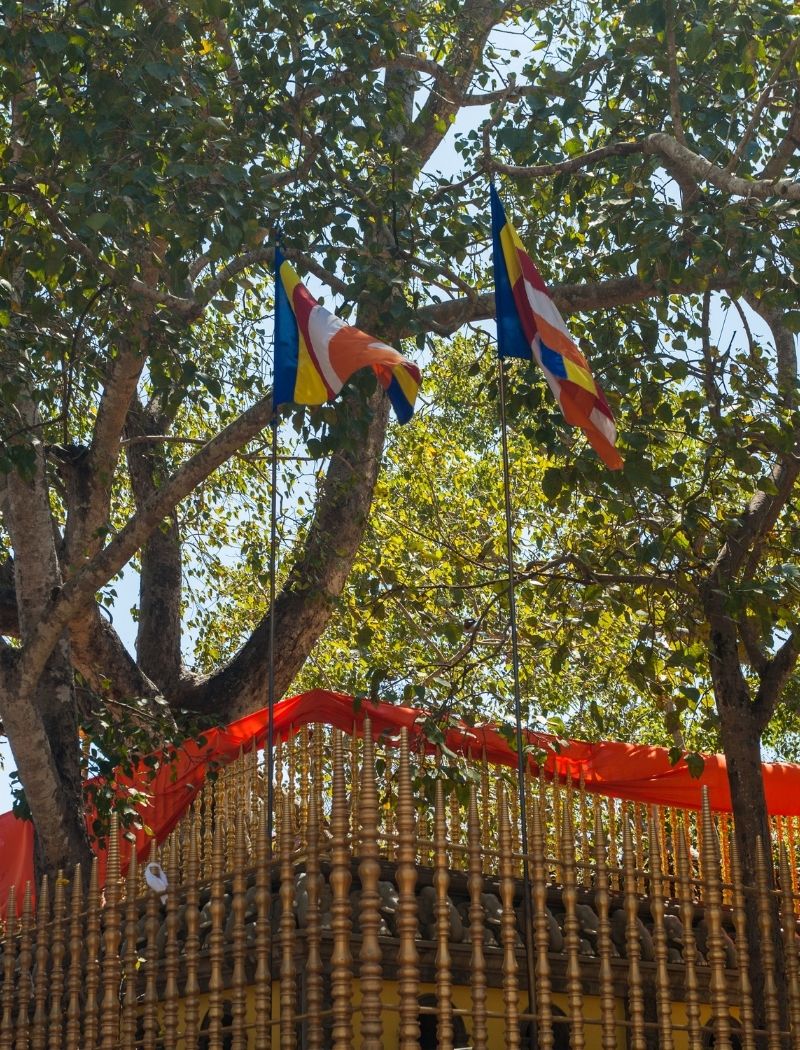 King Valagamba ascended the throne in 103 AD. He waged war with the Tamils and was defeated. When he fled, a Nigantha named Giri shouted words of derisive mockery at him. Later the king collected an army attacked the Tamils by slaying the last of their leaders and recovered the throne he had lost. It is said that he demolished Nigantaramaya (the temple of the Niganthas) and built the Abhayagiri Vihara in the same premises. Shortly after this event, the monks of the Mahavihara took disciplinary action against one of the bhikkus of the Abhayagiri Vihara, for violating a rule of the vinaya.

After defeating the Tamil king Elara, King Dutugemunu of Sri Lanka built this magnificent stupa. The stupa is known as Ruwanwelisaya, Mahathupa, Swarnamali Chaitya and Rathnamali Dagaba. The compound is supported by stone elephants, and the surrounding wall is decorated with 1,900 figures of elephants – 475 on each side. Successive kings added to the palace over the years. 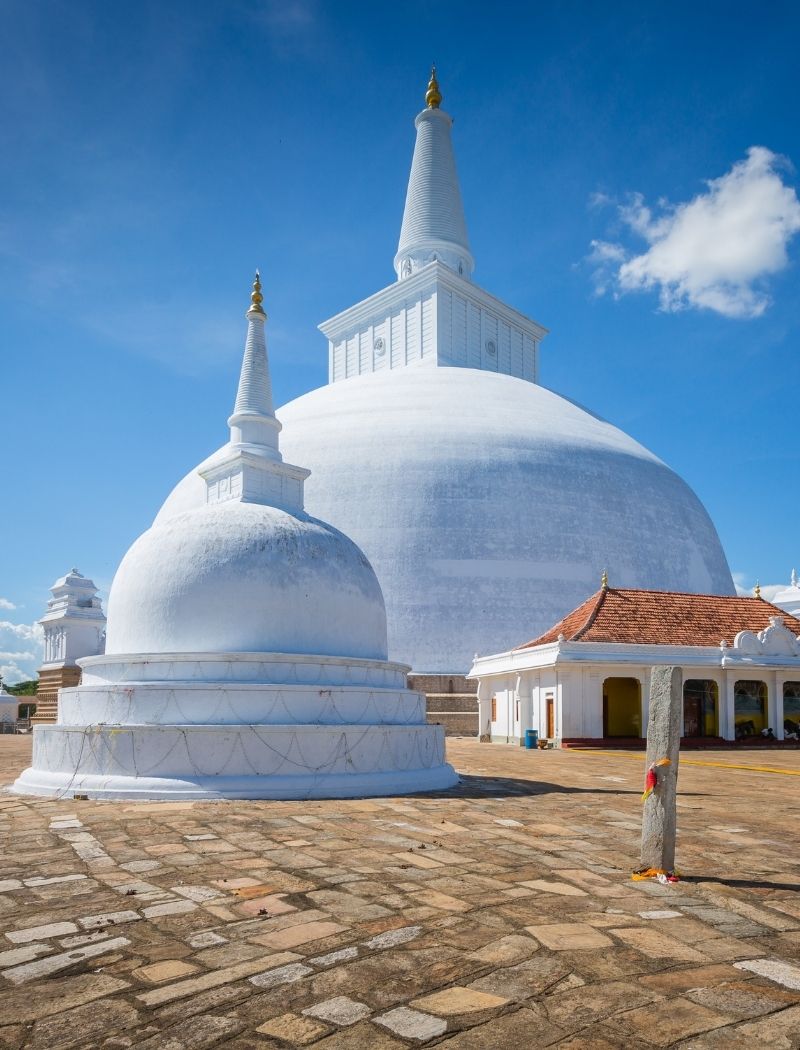 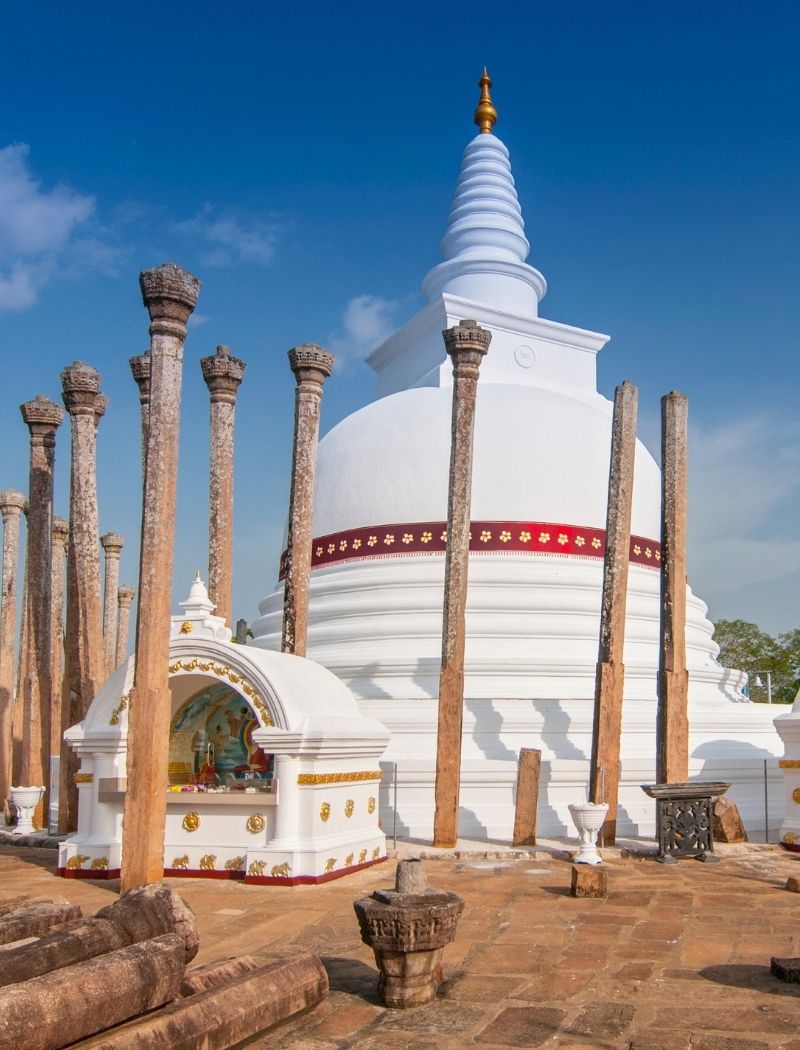 Thera Mahinda himself introduced Theravada Buddhism and also chaitya worship to Ceylon. At his request, King Devanampiyatissa built Thuparamaya in which was enshrined the collarbone of the Buddha and is considered as the first dagaba built in Sri Lanka, after the introduction of Buddhism. This chaitya was built in the shape of a heap of paddy. This dagaba was destroyed from time to time. During the reign of King Agbo II, it was completely destroyed and the King restored it. What we have today is the construction of the dagaba, done in 1862 AD. As it is today, after several renovations, in the course of the centuries, the monument has a diameter of 59 ft (18 m), at the base. The dome is 11 feet 4 inches (3.45 m) in height from the ground, 164½ ft (50.1 m) in diameter. The compound is paved with granite and there are 2 rows of stone pillars round the dagaba. During the early period, vatadage was built round the dagaba.

Lovamahapaya is situated between Ruvanveliseya and Sri Mahabodiya. It is also known as the Brazen Palace or Lohaprasadaya. In ancient times the building included the refectory and the uposathagara. (Uposatha house). There was also a simamalake where the sangha assembled on poya days to recite the formula of the confessional]. The famous Lohaprasada built by King Dutugemunu described as an edifice of nine storeys, was a building of this class. One side of the building was 400 ft (120 m) in length. As the roof was covered with tiles made of bronze, this was known as the Brazen Palace. There are 40 rows, each row consisting of 40 stone pillars and a total of 1600 stone pillars were used for the building. It is believed that it took 6 years for the construction of the building and the plan was brought from the heavens. The building was completely destroyed during the reign of King Saddhatissa. 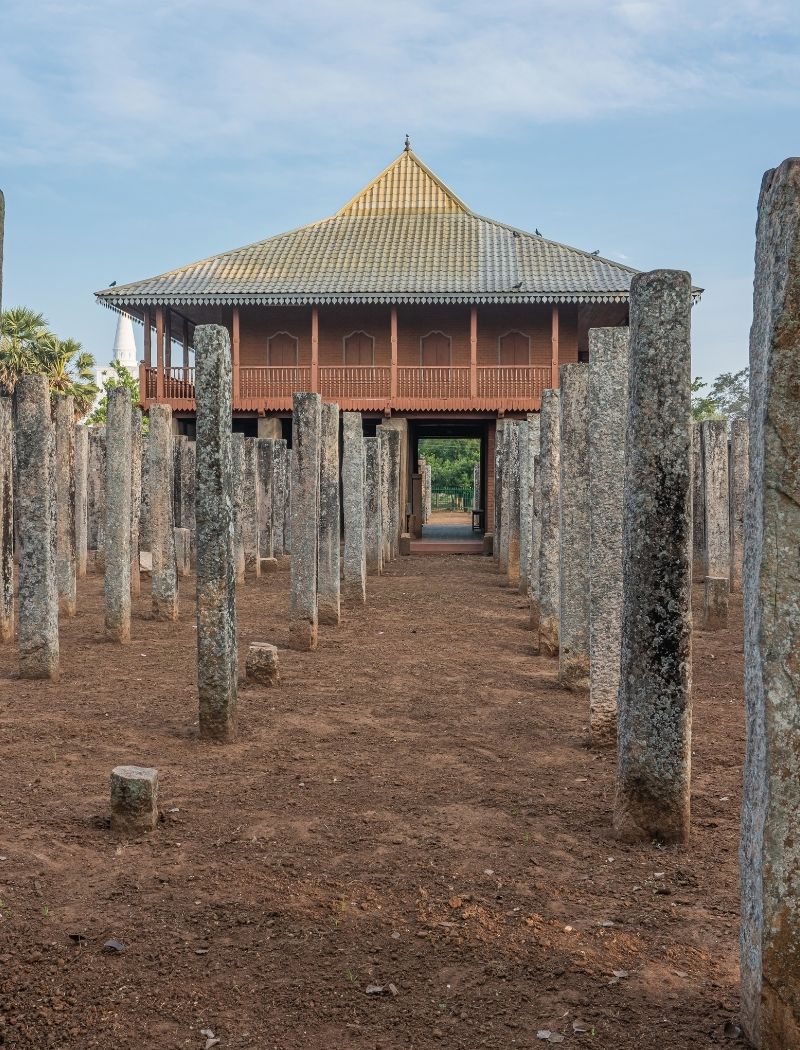 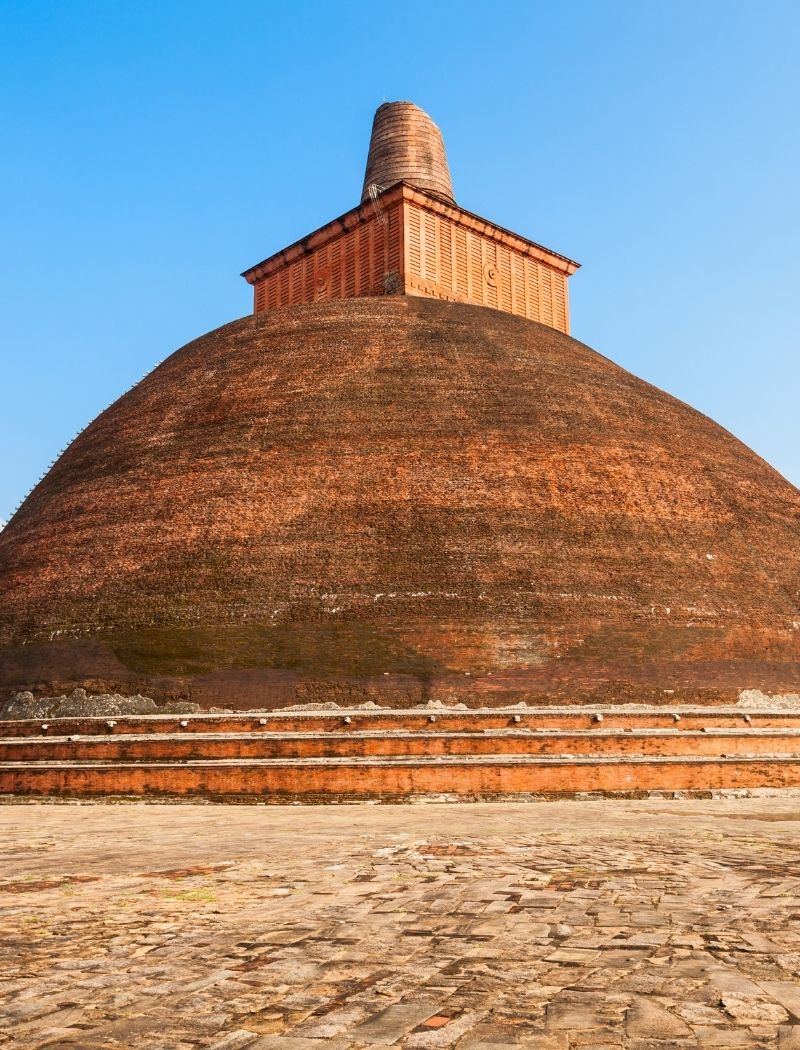 King Mahasen (273-301 AD) built this largest stupa in Ceylon, and possibly the whole world. A part of a sash tied by the Buddha is believed to be enshrined here. Its height is said to be 400 feet (120 m). This is considered as the largest stupa in the whole world. This stupa belongs to the Sagalika sect. The compound of the stupa is 8 acres (3 ha). One side of the stupa is 576 feet (176 m) in depth. The 4 flight of steps at the four sides is 28 feet (8.5 m) in depth. The doorpost to the shrine which is situated at the courtyard is 27 feet (8 m) in height. It is afoot (0.3 m) underground. There are some stone inscriptions in the courtyard with the names of donors inscribed.

Lankarama was built by King Valagamba, in an ancient place at Galhebakada. Nothing is known about the ancient form of the stupa, and later this was renovated. The ruins show that there are rows of stone pillars and it is no doubt that there has been a house built encircling the stupa (vatadage) to cover it. The round courtyard of the stupa seems to be 10 feet (3 m) above the ground. The diameter of the stupa is 45 feet (14 m). The courtyard is circular in shape and the diameter is 1332 feet (406 m). 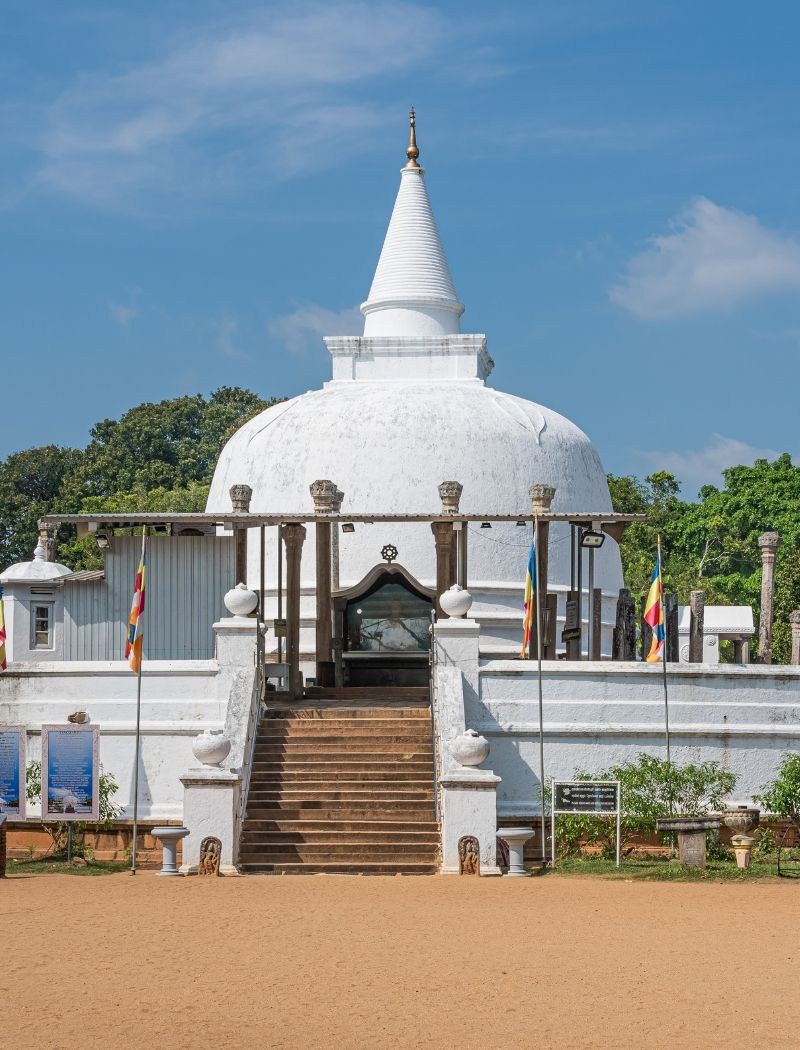 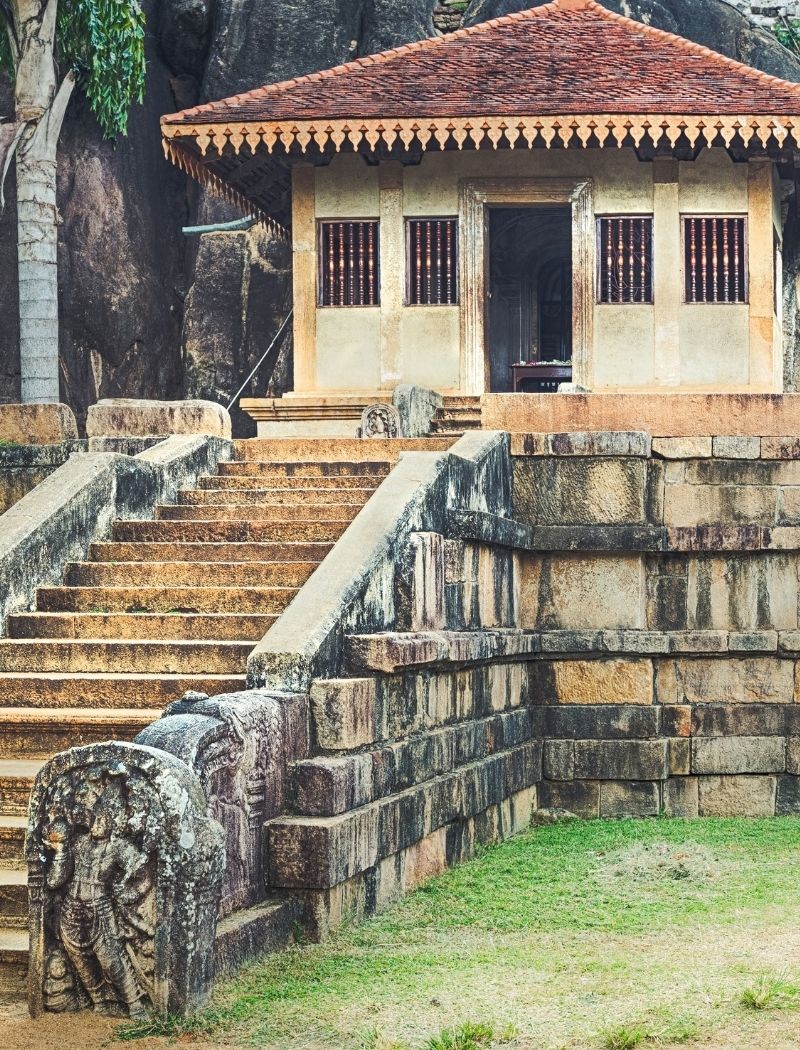 Isurumuniya is situated near Tisawewa and was built by King Devanampiyatissa to house 500 newly-ordained children of high caste. King Kasyapa I (473-491 AD) renovated this viharaya and named it as “Boupulvan, Kasubgiri Radmaha Vehera”. This name is derived from the names of his 2 daughters and his name. There is a viharaya connected to a cave and above is a cliff. A small stupa is built on it. It can be seen that the constructional work of this stupa belongs to the present period. Lower down on both sides of a cleft, in a rock that appears to rise out of a pool, have been carved the figures of elephants. On the rock is carved the figure of a horse. The carving of Isurumuniya lovers on the slab has been brought from another place and placed it there.

Rathna Prasadaya was built by King Kanittha Tissa who ruled Ceylon from 167-186 AD. It is known that during the 8th and 10th centuries Mihindu II and Mihindu IV renovated that building. The bhikkhus of the Tapovana belonging to the Pansakulika sect resided here. Beautiful guard stones of the Abhayagiri Viharaya were found here. The Queen’s Palace, containing the largest and the most beautiful moonstones, is near Ratna Prasadaya. 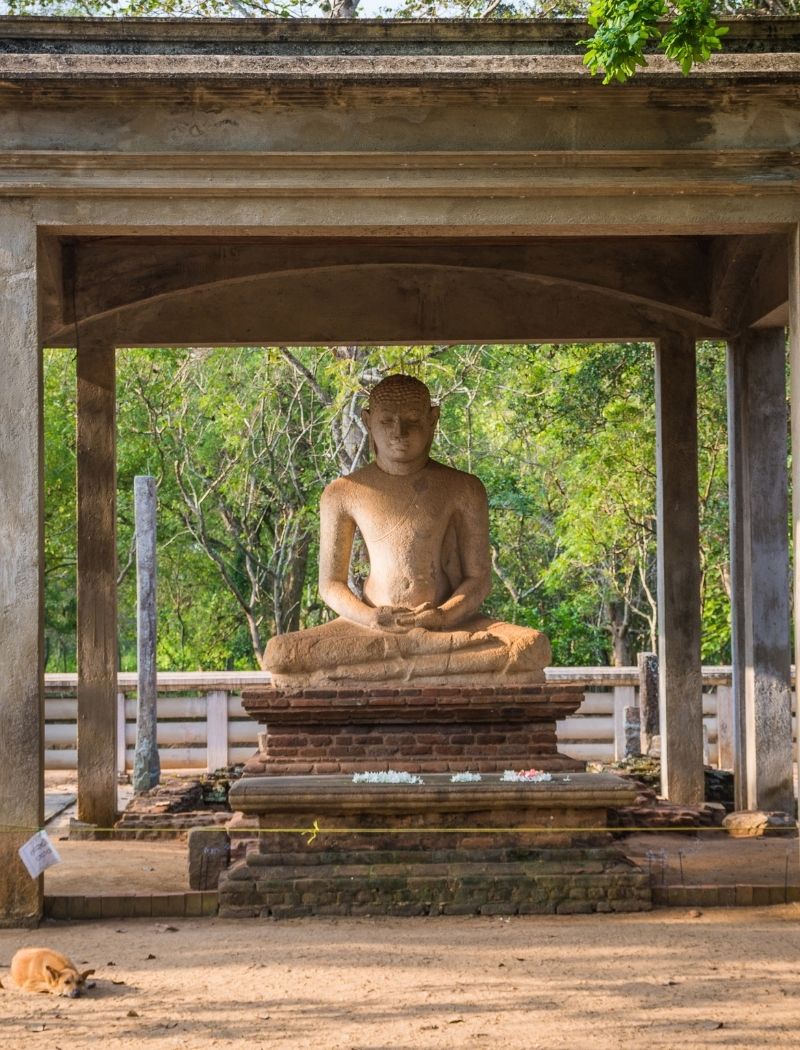 Samadhi Statue, in Mahamevuna Park, is one of the best pieces of sculpture on the site. The statue is 8 feet (2.4 m) in height and made of granite and the Dhyana mudra is symbolized – The posture of meditation in which Buddha sits in the cross-legged position with upturned palms, placed one over the other on the lap. [edit] Toluwila Statue Which has a close resemblance to the Samadhi statue at Anuradhapura, was found among the ruins in a temple at Toluwila in Anuradhapura. It is 5’9″ (1.75 m) in height. The gap between the knees is 5’9″ (1.75 m). The width between the shoulders is 3’5″ (1.04 m).

Five kilometres southeast of Galle, the ever-expanding village of UNAWATUNA is...